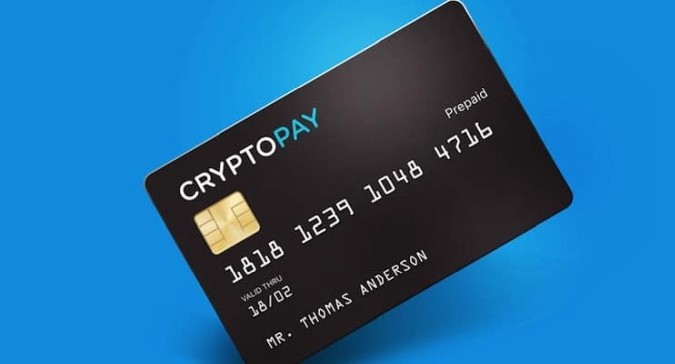 Cryptopay launched an ICO at the end of 2017, but together with the whole crypto market this ERC-20 token crashed. The token is currently undervalued and the market will discover that in the future.

Cryptopay was established in 2013 and made it very easy for users to purchase bitcoin via bank transfer. You can hold the purchased bitcoins in the online Cryptopay wallet. The company also launched a popular prepaid credit card and you can use your bitcoin wallet to load up this card. This is a very popular and easy way to cash in on some crypto profits right away, since you can easily pay everywhere with these credit cards.

The online cryptocurrency wallet, the exchange of fiat money to crypto coins and vice versa and the prepaid creditcards are the main activity of Cryptopay. In addition, there is also a B2B branch that has been growing rapidly in recent months: Cryptopay takes care of the payment processing of websites that want to accept payments in bitcoin.

In 2017, Cryptopay had 450,000 registered users and more than 91,000 credit cards were in circulation. The company wanted to grow faster and, among other things, wanted to develop a 'Bitcoin Stock Brokerage' to meet the needs of 'bitcoin hodlers' that had become very rich in a short time. In this way, customers could quickly convert their crypto coins into shares of listed companies.

Other banking services and IBAN current accounts were also considered. After all, traditional banks hardly understand the crypto world and customers are often confronted with strange questions when they transfer large amounts from a crypto website to their bank account. Finally, Cryptopay wanted to develop a 'P2P marketplace' where ICOs can take place in a regulated manner and which should make trading in tokens simple.

Cryptopay completed the ICO in November 2017, raising around 15.5 million euros. The CPAY tokens initially entitle you to a part of the turnover. Every month 10% of the turnover is distributed among the token holders. For this you only need to hold the tokens in a wallet that supports ERC-20 tokens (and therefore ethereum), such as the Ledger wallets. At the end of every month an Ether network snapshot is made to determine which addresses own how many tokens. A week later you can then claim your rewards by entering your wallet address on the claim page.

Just like competitors such as Wirex or Bitwala, Cryptopay worked with WaveCrest, which provided the prepaid Visa cards. However, at the beginning of January 2018, Visa stopped the collaboration with WaveCrest, making all existing prepaid credit cards of this issuer unusable. Cryptopay had to look for a new solution for the issue of prepaid credit cards. It is therefore not surprising that the price of the CPAY token fell sharply: the credit cards were the main activity of Cryptopay. In addition, the cryptomarket as a whole fell sharply at the beginning of 2018 and the CPAY token was only listed on HitBTC, where the token is traded on very low volumes. The CPAY token is currently trading around 90% below its all-time high.

The reintroduction of prepaid credit cards was painfully slow. Cryptopay has worked hard to set up a prepaid credit card program for which they are almost in full control, so that the situation with WaveCrest can never happen again. By not opting for a fast white label solution, they will have control over many more aspects such as the limits and rates of the cards.

In Russia, the first prepaid credit cards were finally delivered to customers in October 2018. But European customers had to wait even longer and the creditcards will probably be relaunched in March 2020. This was announced in the January 2020 report.

After more than two years of waiting, filled with compliance checks and all kinds of audits, it is finally time for Cryptopay to look forward again.

Despite the problems and the loss of their main activity, Cryptopay has paid the 'rewards' every month since January 2018, as promised during the ICO. In January 2018, the turnover was still very high due to the highly volatile bitcoin price and the prepaid credit cards that still worked for a while. After that, the turnover fell sharply in the 'crypto winter' or bear market.

Here is an overview of the evolution of the turnover and the rewards that CPAY holders have already received.

Every month a sales report is published on the medium page of Cryptopay.

A chart often gives a better picture of the evolution of the turnover. You can clearly see the very strong decline at the start of the chart, but in the meantime, the turnover has been moving in the right direction for several months. It is also striking that the turnover started to pick up again after the relaunch of prepaid credit cards in Russia.

It is therefore important to look out for the effect of the launch of these prepaid credit cards throughout Europe and later perhaps the rest of the world.

Those who invest in a token naturally want the company to have sufficient cash to continue with their business. Cryptopay has more than 100 employees so with a monthly turnover of 400,000 euros you would expect that the cash will be used up quickly, especially if there are investments in additional growth and expensive marketing campaigns.

According to the CFO, Cryptopay was very profitable for more than 4 years, creating a substantial reserve. Together with the money from the ICO, Cryptopay could stay in business for more than 10 years at the current burn rate. For example, in 2018 only 5% of the ICO money was used and it was only used to invest in the development of the Bitcoin Stock Brokerage. The ICO money will not be used to finance the day-to-day operations.

CPAY token is rather a bond

What makes the CPAY token unique is the fact that it is more like a bond. The Terms & Conditions state that the money raised from the ICO is a loan and that the full amount borrowed must be paid back to the token holders. The payment of 10% of the monthly turnover is therefore a repayment of the loan. Every five years an assessment is made as to whether the loan has already been fully repaid. If that is not the case, the payment of the rewards will be extended by 5 years each time.

Because Cryptopay also continued to pay properly during the past difficult months, we have no reason to believe that this full loan amount will not be repaid. In fact, due to the re-introduction of the prepaid credit cards, we expect the monthly payouts to rise sharply.

If, like the last few months, you receive at least 4 eurocents per month per 100 CPAY, you will receive 48 eurocents annually. For 100 CPAY you currently pay around € 3, so the annualized 'rewards' yield is about 16%.

In itself, a return of 16% per year is already very attractive compared to a savings account. But due to the reintroduction of prepaid cards in Europe, revenue can rise considerably and the rewards will naturally also increase. If Cryptopay can again achieve the January 2018 turnover, the yield would be 32% annually at current prices. In about 3 years you will have earned back your investment and after that you can still enjoy the monthly payouts. It goes without saying that in this scenario the price of the CPAY token can also rise considerably.

In addition, there are other things that can support the price of the token. For example, it has long been promised that utility functions will be added to the CPAY token. This is because most exchanges are very reluctant to list a token that pays 'rewards'. It is still unclear which utility will be added, but it could for example be discounts on the rates that we also know from the Binance coin, or cashbacks on transactions with the prepaid credit cards.

Adding utility functions also ensures that the token will become more than just the current loan. This means that it will have value even if the entire loan has been repaid.

On Etherscan we can see that at the time of writing there are only some 2,500 addresses that own CPAY tokens. Cryptopay currently has more than 1 million registered users. With attractive utility functions, the demand for the token will also skyrocket.

Also note that there are only 90 million CPAY tokens: a total supply of 90,414,745. According to CoinMarketCap, there is a circulating supply of 68,363,490 CPAY. Increasing demand, a limited number of tokens available and only a few holders who want to sell: the ideal cocktail for a CPAY price to moon.

Cryptopay developers have kept on working in the background. For example, some new functions were introduced. You can now also buy and store litecoin, XRP and ether on Cryptopay. New cryptocoins will be added and support for ERC-20 tokens is also on the way. This will allow you to hold the CPAY tokens online in the Cryptopay wallet. At the moment you still have to use an external wallet and that is apparently not so easy for many users.

A lot of work has also been done on the introduction of the 'Bitcoin Stock Brokerage'. However, a specific launch date has not yet been announced.

Finally, for the time being, CPAY can only be traded via HitBTC, a less-known exchange among the general public, which at the same time has a rather dubious reputation. Despite this reputation, we have purchased CPAY tokens on HitBTC in recent months and have withdrawn them to an external wallet without any problems.

At HitBTC there is currently only a CPAY / ETH pair. A CPAY / BTC pair has been promised and that could increase the interest in the token a little bit. A listing on other exchanges would be positive, but as stated earlier, the exchanges are reluctant to list tokens that pay out a reward. Adding utility functions could convince larger exchanges to list CPAY and thus provide more volume.

As for now, we are looking forward to the launch of the prepaid credit cards in Europe, for which a substantial advertising campaign has been prepared. And we'll keep on waiting until this hidden gem gets discovered by the broad market.